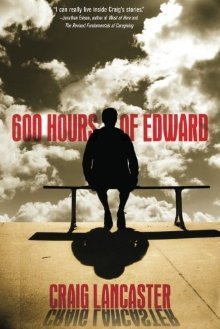 What They Say: Edward Stanton is a 39-year-old with Asperger's syndrome and obsessive-compulsive disorder who tracks his most common waking time (7:38 a.m.), refuses to start his therapy sessions even one minute before the appointed hour (10:00 a.m.), and watches exactly one episode of Dragnet each night (10:00 p.m.). When 9-year-old Kyle and his mother move in across the street, Edward's timetable is upended, and for an exhilarating 600 hours, he opens his door to new neighbors and new problems. The solace of friendship, however, comes with risks ? heartache, uncertainty, and change. Ultimately, Edward must decide whether to remain in his rigid, solitary world or embrace the beautiful vagaries of the heart.

What Sheli Says: I really enjoyed this book and found it hard to put down. In the 600 hours we spend with Edward we join him on a rollercoaster ride of emotions, events and see him coming to terms with himself and the actions of other people.

The book is written in a diary format and as you can imagine for someone who has aspergers and severe OCD, can be quite repetitive. I felt that this added to the story and became a real part of Edward’s character.

The book was both funny and heartbreakingly sad in some places and I look forward to reading more about Edward and his adventures.


“I tried eHarmony, because I liked the white hair and glasses of that guy on the commercials, and his manner was gentle, but eHarmony told me that the system and it's twenty nine levels of compatibility couldn't find anyone for me.
That hurt my feelings.”
Find it on Amazon
Posted by Unknown at 16:00