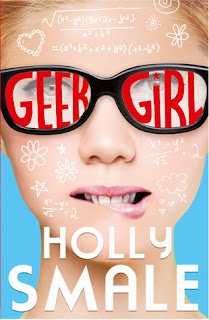 What They Say: Harriet Manners knows a lot of things.

She knows that a cat has 32 muscles in each ear, a "jiffy" lasts 1/100th of a second, and the average person laughs 15 times per day. What she isn't quite so sure about is why nobody at school seems to like her very much. So when she's spotted by a top model agent, Harriet grabs the chance to reinvent herself. Even if it means stealing her Best Friend's dream, incurring the wrath of her arch enemy Alexa, and repeatedly humiliating herself in front of the impossibly handsome supermodel Nick. Even if it means lying to the people she loves.

As Harriet veers from one couture disaster to the next with the help of her overly enthusiastic father and her uber-geeky stalker, Toby, she begins to realise that the world of fashion doesn't seem to like her any more than the real world did.

And as her old life starts to fall apart, the question is: will Harriet be able to transform herself before she ruins everything?

What Sheli Says: What can I say? I was drawn to this book by the cover, and we all love a geek (especially if you are one like me!) and had to give it a go.

It was a quick, fun read and had more substance to it than I was expecting. The main character Harriet reminded me of myself as a teenager as she was a social outcast who couldn't do or say the right thing at the right time, but was very brainy. Although I have to say that the similarities to my own youth stopped at the modelling contract!

Some parts of the book were laugh out loud funny, particularly when Harriet was getting into the world of modelling. I loved that it was a book about the geeky girl who did well in an unexpected way, and was a teeny bit jealous that I hadn't had the same opportunities!

I liked the style of writing for this book and hope that this isn't the last we see of Harriet Manners. I will also be seeking out more of Holly Smale's work in future.

A great book, for both adult and young adult readers.


“I didn't need to transform after all.
My name is Harriet Manners and I am a geek.
And maybe that's not so bad after all.”
Find it on Amazon﻿
Posted by Unknown at 15:00