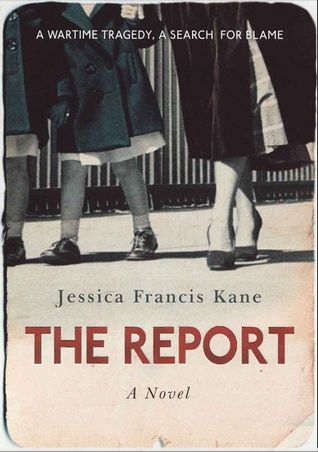 What They Say: A stunning first novel that is an evocative reimagining of a World War II civilian disaster.

On a March night in 1943, on the steps of a London Tube station, 173 people die in a crowd seeking shelter from what seemed to be another air raid. When the devastated neighborhood demands an inquiry, the job falls to magistrate Laurence Dunne.

In this beautifully crafted novel, Jessica Francis Kane paints a vivid portrait of London at war. As Dunne investigates, he finds the truth to be precarious, even damaging. When he is forced to reflect on his report several decades later, he must consider whether the course he chose was the right one. "The Report "is a provocative commentary on the way all tragedies are remembered and endured.

What Sheli Says: I'm going to come right out and say it, I was a bit disappointed by this book. I downloaded this a while ago and was really looking forward to reading it. The beginning of the book really sucked me in, but I found the rest of the book a little bit lacking.

The story is a fictional account of what happened on the night of the crush in Bethnal Green after the air raid siren went off in March 1943. We get to experience the accident, see the after effect on some of the families involved and get involved in the mechanics of the report being written. This is interspersed with a second storyline about the author of the report being tracked down by someone from Bethnal Green wanting to make a retrospective of the disaster on the 30th anniversary. I found this second storyline a little unnecessary and don't really feel that it added anything to the story.

Overall I did enjoy the story in principle and really felt that it was evocative of wartime London, I just found that it didn't really grab me in the way I would have hoped it would and in some places found it very slow.

“Forgiveness without understanding is like faith without proof.”
Find it on Amazon
Posted by Unknown at 16:00