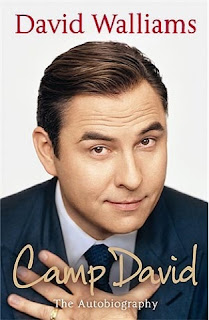 What They Say: It's time to get serious with Britain's favourite funny man - Camp David, by David Walliams.

David Walliams has been the camp aide to the Prime Minister, the rubbish transvestite and the long-suffering wheelchair pusher for an able-bodied man. He was launched to fame with the record-breaking Little Britain, and for a while you couldn't enter a playground without hearing "eh eh eh eh" or "computer says no".

But David Walliams is more than a comedian. He's a fascinating and complex person with a sharp intellect, a sensitive disposition and a refreshing honesty. Often described as 'a bundle of contradictions', he has disarmed people by being camp and a ladykiller, a hedonist and a sportsman, aloof and warm. Like many of our comedic geniuses - Frankie Howerd, John Cleese, Kenneth Williams - he has grappled with depression and remains an enigma.

His autobiography Camp David is a roller-coaster ride of emotions. It will surprise and entertain, and allow fans and newcomers the privilege of entering David Walliams' uniquely brilliant mind.

What Sheli Says: David Walliams is a comedian who has gradually grown on me over the last couple of years, but I never felt like I knew much about him apart from his reputationas a ladies man and his love of dressing in ladies clothing!

When this book was published I couldn't resist taking a peek at the world of the enigma that is Mr Walliams. And I was not disappointed. I found it difficult to put this book down and was awake until stupid o'clock reading from the Kindle app on my phone.

This autobiography is full of laughs, but also contains a great deal of sadness and a huge helping of honesty, particularly in relation to Walliams' relationship with his father, his sexuality and living with  mental ill health. All three have had a major impact on his life, but were dealt with sensitively and in a very human way.

I have huge respect for Walliams for being so honest and also taking such a high profile and brave step to talk about depression and help to break down the stigma against mental health. I also may love him a little bit now....